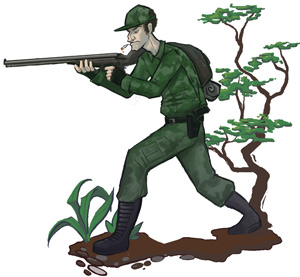 Introduction: I gave a presentation at the 2007 Popular Culture Association Conference about the link between the survivalist movement and the zombie genre. I’ve divided my presentation into two blog posts. In part 1, I focus on the survivalist movement while in the second part, I discuss its connection to popular zombie narratives. The second part will be posted Tuesday.
—
Civilization crumbles apart as the Other lay siege to its last bastions of safety. Millions die or are converted to the Other during the assault. Only small groups of isolated citizens survive the apocalypse safe from the Other. They collect stockpiles of weapons and supplies to build a better future, utilizing craft and military skills to maximize the effectiveness of their tools. Many times, the survivors are overcome by the Other, but die in a blaze of glory before succumbing to the horde. The post apocalyptic world is a new frontier where only the skilled and wise adapt and survive. This story formula is not unique to the zombie genre. Survivalists have been telling similar stories since the start of the Cold War. While zombie aficionados do not sincerely believe their tales of apocalypse will one day come true, both the survivalist and zombie mythos share several key motifs. In particular, the concept of bricolage is central to both genres, as the protagonists of these stories overcome the Other (in the form of the undead or various barbaric armies of the New World Order) through skilled tool use in a variety of fields.   In this sense, these stories aim for the same goal, the reassertion of individuality over the savage multitudes of the world.

The origins of the survivalist movement begin in the Cold War, when fear of nuclear annihilation and Soviet infiltration led to a growing uncertainty in the future. Conspiracy theories about Soviet world domination and post apocalyptic fiction appeared in popular culture and gained a following. By the mid seventies, survivalism as a subculture had taken root, with groups and magazines circulating nationally. Writers such as Kurt Saxon popularized the idea of stockpiling firearms and supplies and building a shelter or retreat in preparation of a future apocalyptic catastrophe.

Survivalism’s prominence rose in the 1980s, as fear of nuclear war rose and mainstream culture took notice of the movement. For example, the movie Red Dawn, depicted the story of a group of teenagers fighting off a Soviet invasion in the Midwest using survivalist tactics. Gradually, survivalists became linked to various militia groups and in some cases, to extremist groups, such as the Branch Davidians. As the Cold War ended, survivalism went into a downswing, as many lost interest in the topic. However, survivalism resurged during the lead up to the Y2K dilemma and after 9-11. Today, survivalism is practiced around the world, as uncertainty over the future grows stronger.

While survivalism takes many forms, it contains several key beliefs. First and foremost is the belief that disaster looms in the near future, almost always in a man-made form, such as war.  They spend a great deal of time and effort to describe the nature of the apocalypse, as prophetic storytellers. Most survivalist apocalypses are brought on by man, typically governments or other monolithic institutions, such as United Nations. This is an important detail, as distrust of the government is another fundamental characteristic of the movement. Many survivalists rationalize their actions through this distrust. “If the government won’t protect me, then I must.” However, it should be noted that the majority of survivalists are not lawbreakers, but simply await the day when central authority will crumble into anarchy. Furthermore, survivalists believe that whatever skills and equipment they acquire now will be the key to rebuilding civilization after the apocalypse. Acquiring gold and silver coins only makes sense if the post apocalyptic economy depends on them. There is no universal skill set or equipment list but there is a commonality between them, namely their connection to the concept of bricolage, as defined by Claude Levi Strauss.

In The Savage Mind, Strauss coined the term bricolage to describe mastery of tool use without professional standing or training and practitioners are called bricoleurs. As Strauss defines it:

“The bricoleur is adept at performing a large number of diverse tasks; but unlike the engineer, he does not subordinate each of them to the availability of raw materials and tools conceived and procured for the purpose of the project. His universe of instruments is closed and the rules of his game are always to make do with whatever is at hand, that is to say with a set of tools and materials which is always finite and is also heterogeneous because what it contains bears no relations to the current project or indeed to any particular project…the elements are collected or retained on the principle that they may always come in handy. (18)

MacGyver is the epitome of bricolage. The emphasis on homespun knowledge and improvised solution as opposed to professional methods and techniques underlies the purpose of bricolage. It creates a space where the average person can become an equal to the educated elite. Survivalists have created an alternative identity by arming themselves with They make use of consumer goods and transform them into symbols of power, proof of their future ascendancy after the apocalypse, the firearm the highest of all symbols. All survivalists describe elaborate scenarios in which their unique combination of tools and skills will guarantee their survival Richard G. Mitchell explains this in his book Dancing at Armageddon.

“But as symbolic adjuncts to personal competence, as centerpiece stage ware in survivalist scenarios, guns alone will not do. They must be set in suitable contexts, surrounded by what-if circumstances where hostility and martial strife, not starvation, disease, injury, or other debility, are the preeminent problems. Paradox worlds must be constructed where ‘defense’ looms paramount, where the core cultural product, the essential means of production, are the means of destruction. As the institutionalized social order fails, restoration of order (though not institutional order) ascends in salience. Here survivalism can flourish, not in authentic contention, in armed battle with capable adversaries, but in the artful dramatization of technical readiness, in displays of relevant tool-skill, in bricolage.” (85)

In many ways, survivalism is a rational reaction by its adherents in the face of the modern world.  They pride themselves on their independence from mainstream society, which they see as corrupt and unstable, traits shared by the zombie genre.