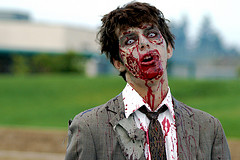 The Smithsonian Surprising Science blog has compiled a list of real zombie science links including mathematical modeling work to determine how fast zombies would infect a populace, zombie biology and other source of information. Sadly, these sources are rather rudimentary. Where is the work on zombies and renewable energy or speciation? As we have seen time and time again, zombies vary widely – some are fast, others are slow and others have exotic traits and abilities, yet no work is being done to explain the evolution of the zombie. 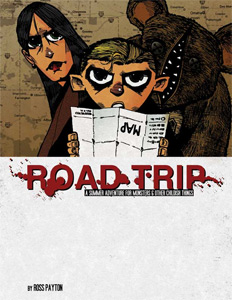 In order to create the book, I drew on the skills and resources I had gained while freelance writing in the tabletop RPG industry, running the podcast Role Playing Public Radio and designing books for Lens & Pen Press.

Writing: I’ve written two books for Arc Dream (Road Trip and Curriculum of Conspiracy) along with numerous shorter articles and PDFs for various companies. I’ve also written four long form PDFs for the New World Campaign, an original fantasy setting that I used for the RPPR Dungeons and Dragons campaign.

Writing for role playing games is an interesting combination of fiction and technical writing. You must write imaginative material that engages the reader yet it must described in a clear and concise manner so that it can be used in a complex game. Failing in the former task results in a boring piece that no one will want to use in their game and failing in the latter task results in rules arguments that derail the game. This style lends itself to the fictional pseudo-guide genre, as typified by books like the Zombie Survival Guide. For Zombies of the World, I went for the authoritative style common in nature guides and history texts.

Graphic Design: My background in graphic design is more limited than my writing but no less important. I’ve laid out every book published by Lens & Pen Press. While I do have some formal training in writing, my graphic design skills are entirely self-taught so I have no illusions about being a true master in this field. However, since I had developed journeyman level skills, I didn’t have to hire someone else to lay Zombies of the World out or do the prepress work so Tien Wah Press could print it. It also made it easier to write the book since I could adjust the layout to fit the content or vice versa. If a caption was a bit too long or short, it’s far easier to simply tweak it in Indesign than getting someone else to revise it. 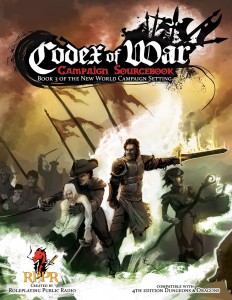 Collaborating over the Internet: Finding and working with artists from around the world you’ve never met face to face to create high end may sound like a daunting task if you’ve never done it before but I gained experience in doing this while working on Role Playing Public Radio.  Starting in 2009, I collaborated with several artists and writers to create a series of book length PDFs for the RPPR actual play campaign, The New World. I wrote about the process of creating the first PDF, the New World Primer on my blog.

Through this, I met several great artists and how to contact other artists about collaborating on the Internet. Talking with them consisted mostly of emails and IMs to determine how much they could contribute, what they would contribute and other technical issues. The greatest challenge comes from communicating the ideas you want the artist to draw without confusing or alienating them. It’s also preferable, in my experience, to encourage the artist to make suggestions about the piece. They often have great ideas on improving the quality of the art. In general, I would describe the work I needed in a few paragraphs and then provide relevant background information and reference work for the artist. Then the artist would create a sketch and make suggestions and we would go back and forth until the piece had been hashed out. There’s a fine line between being too demanding and exacting and being too vague. It’s important to strike a balance between them so the artist doesn’t get burned out or confused.

With these skills, I was able to create Zombies of the World. In the next post, I’ll talk about planning and design and its importance in creating the book.

Zombies of the World will be displayed at the Book Expo of America and as part of that, there is a flash preview available of the book online, available here. You can only see up to 20 pages but you can skip around to see the different sections of the book.