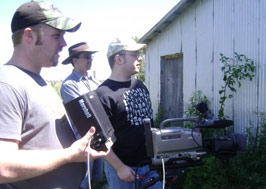 Making a good short film with very little money is difficult but it rewards creative thinking. More importantly, by knowing your limitations, it’s possible to write a story that seems to have a higher budget than it actually does.  This is a long standing tradition for independent film and video production. Robert Rodriguez got a lot of mileage for his first film, El Mariachi by creatively using what limited resources he had available to him. For Zombies of the World, I had to keep a few limitations in mind: 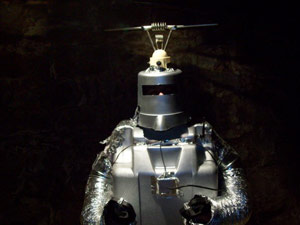 Production was thankfully fairly uneventful. We shot on three separate days – one for each location. The shortest day was the warehouse where a Chinese Hopping Corpse attacks a worker while the longest was at the Creamery Art Center. We shot the interviews, the mummy sign language scenes in the main floor and the Aztec Mummy vs. Robot fight in the center’s basement.

The inclusion of robots into Zombies of the World was necessary so I could include a reference to the classic Mexican horror film The Robot vs. The Aztec Mummy. I looked into the copyright status of the film in order to see if I include a clip into the web series. Sadly, it is not public domain so I could not use real footage, thus the recreation. Another reason I wrote the fight scene in the script was because I knew I had access to the Center’s basement, which is appropriately creepy, especially with the right lighting and visual effects. You’ll see the videos online in the next month. 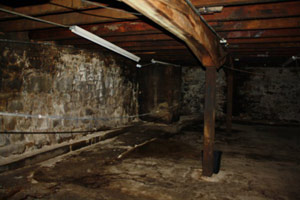 In order to realize the documentary style, I commissioned Tom Rhodes and Bryant Koshu to create ‘artist’s recreations’ of key concepts in the series. These images would be panned across, like a Ken Burns’ documentary. After the production finished, I realized I had more ideas than I began with and I had a lot of great art from the series. With my background in writing and graphic design, I could create a book about zombies.

In the next post, I’ll talk about the process of writing Zombies of the World.

1 thought on “Behind the Scenes: making the web series”