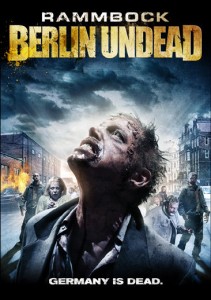 As part of getting ready for Halloween, I’ve started binging on zombie films. There’s a good number of them on Netflix and I watched a hidden gem on it recently: Rammbock. It’s only an hour long so any zombie fan should take the time to watch it.

Rammbock follows Michael, on his way to see Gabi, his ex-girlfriend in Berlin, when the undead rise up. He becomes trapped in her apartment with a teenager named Harper, but Gabi is nowhere to be seen. As the apartment faces the inner courtyard of the building, Michael and Harper talk to the other residents in hopes of figuring out how to survive. Of course, their plans don’t quite work out so well.

I enjoyed Rammbock because it offered good acting, a good story, and interesting dilemmas for the survivors. The zombies had a few unique quirks of their own, and the film wraps nicely in only an hour. Gorehounds will be very disappointed though, as there is very little blood and no gruesome death scenes. However, if you enjoy interesting takes on the dilemmas survivors would face in a zombie attack, give Rammbock a try. 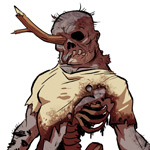 END_OF_DOCUMENT_TOKEN_TO_BE_REPLACED

One of the best pieces of zombie literature will finally hit the silver screen next year:

Paramount has announced they’ll be dropping their Brad Pitt-led zombie movie “World War Z” into theaters on December 21, 2012. The film is currently shooting with Marc Forster directing the Black List-approved script by J. Michael Straczynski (with rewrites by Matthew Michael Carnahan) that centers on a UN bureaucrat named Gerry Lane, who in the aftermath of the zombie war is asked to compile a complete report on the incident.